If you want to keep up with me 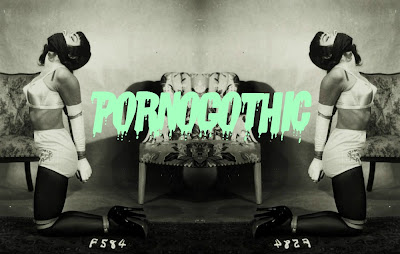 I've fallen out of the vintage world and more work in the fashion world. I'm designing and creating things of my own along with working as a stylist and photographer. If you think you might want to keep up with the things I'm doing, here's my new blog.
www.pornogothic.com
I put a lot of time and work into my new blog, so check it out if you like.
Thank you all for following me
By the way, I am selling quite a bit of my vintage wardrobe and knick-knacks so if you ever saw anything you'd be interested in buying shoot me and email at Kitschcakephoto@gmail.com
Im currently working on moving to New York City, so the more money I have, and less things I have to move the better!
Thank you!
xxxSHANE
Posted by Shane Tenczar at 11:25 AM No comments: 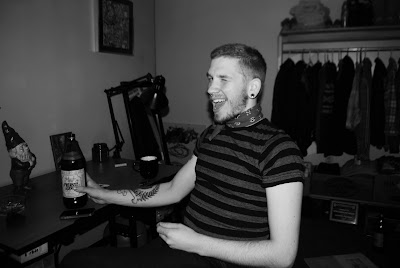 I went to a friend's birthday party last night in Beverly(my last night living in Beverly, actually!) and I wanted to wear something nice, but I didn't want to wear vintage. I go through that battle constantly. Especially at school, seeing as people still smoke in their apartments. That is one thing I'm happy has changed since the 40s/50s/60s/ is that people don't really smoke indoors too often.
So while collecting vintage I have been trying to find the best look for myself in reproduction type clothing. I've found a pair of jeans thats come up to my hips, so just shy of where my trousers hit, and they are a good classic blue. I also love me some striped tee shirts.
Good mens vintage reproduction is really hard to come by, especially for an affordable price. There's great companies like Ole' Woogies, Freddies of Pinewood and Tarantula Clothing but I can't afford any of their clothes. I can afford vintage over these companies though.
SO Im pretty much posting about nothing. I'm running on 3 hours of sleep on my moving day.
Posted by Shane Tenczar at 8:46 PM 1 comment: 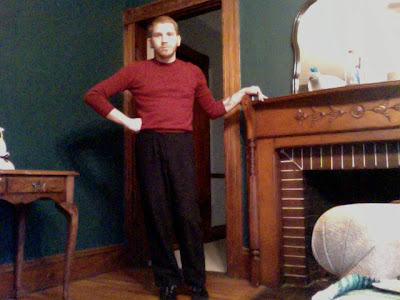 I did hop back into the vintage swing of things. THis was my outfit today. some 40s mens trousers(not the ones I wanted to wear today but these will suffice I guess) and a non-vintage but still old sweater. most likely from the 70s/80s. I just threw on some plimisols for basic footwear. I need to Shave, pretty bad. haha But I figure I would show you guys(via crappy web cam photos since my camera already made the move Im working on) what I looked like while I've been at school. I was really into goth again hahaha. Below is my outfit I wore while I was packing up my stuff and dancing around with my roommate. A pentagram shirt cut into a tank top(gift from the roomie) and my red shorts from H&M that I cuff shorter. oh yeah, and 6 inch black patent leather platform heels. No big deal. 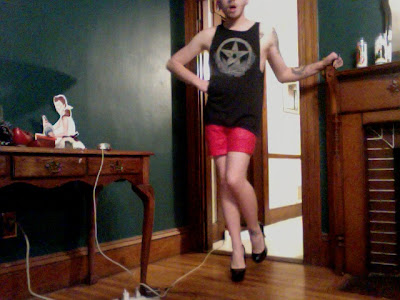 So I am working on Move number 4 since August.
One from old to new house in Palmer,
One to Revere,
One to Beverly,
Now this one back to Palmer.
I am in the process of packing up all of my dishes. Again. I hate that part of the move. I have so much stuff. I am exhausted just thinking about packing and unpacking all of this stuff. and then setting up a whole new room. But this one is a bit bigger which is nice. I need to make some drapes for it and I need a new bed spread. I want a chenille one, I just don't know what color. my drapes are going to be made out of that green atomic print fabric I posted about a few months ago.
Posted by Shane Tenczar at 5:30 PM 2 comments:

I went to and left school. Hated it.
Beck and I don't really talk anymore. I really miss her, I don't think she cares.
Now Im moving back to Western Mass to get on my feet.
I know a lot of people are going to judge me for leaving but frankly I wasn't enjoying it to the point were I was just drinking to avoid dealing with life. Then I figured out I had to do something about it before things when too far.
So Im moving back home to work and figure life out. haha
I havent really worn any of my vintage clothes in months. I haven't done much vintage hunting but I have stumbled onto a few GREAT pieces(like the Heywood Wakefield twin bed frame I found.)
So I don't want to talk much about school, but if anyone wants to know anything you can leave questions in this posts comments.
Posted by Shane Tenczar at 1:44 PM 6 comments:

Sorry for the big old gap between posts. I have had a crappy week(that included a small car accident while on a date, being given a hickey the size of Texas(ew, but if you would like to see it i will totally upload pictures, this thing really was huge) and then getting a "let's just be friends" email all within 24 hours then throw in a lack of emotional support for my first real time being rejected by a guy sent me spiraling into a dark abyss that has been my life.) So Im in Western Mass now. and I never want to leave again. I like my comfort zone and I dont want to go back to the north shore for along time. Sadly I start school in like two weeks so I have to go back.
But Milltown was great and I got to help do hair on Roy Varga's shoot that Sunday. I also got to have him and Viva Van Story give me some feedback on my photos. I got exactly what I figured I would from Roy. I need to fix my lighting.
Oh by the way, it's totally my birthday. Still a baby though, only turned 19
Posted by Shane Tenczar at 12:35 AM 7 comments:

Return to the Milltown! 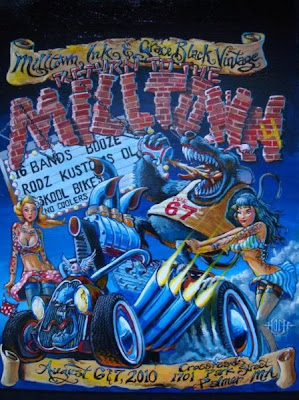 As the weekend slowly approaches the highlight of my summer draws nearer. The Return to the Milltown show is the best show in Massachusetts if not all of New England. It's Friday and Saturday this weekend and I can hardly wait. Beck and I talk about this show year round. Lance and Grace(pictured below, Photo by Roy Varga) are some of the greatest people and the best show promoters out there! 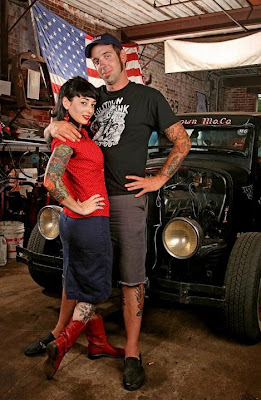 This weekend has 18 kick ass bands from all different areas of the rockin' spectrum! They really put a great lineup together! I know it'a gonna be a great time seeing a whole lot of great bands, great people and some kick ass cars to-boot! Last year on Saturday the show filled to capacity and there were over 800 cars(or at least that's what I've heard all I know is that the huge field was full of great pre'67 cars)
So if you're around this weekend and live within a couple hours of Palmer Mass(my home town) you should make the trek to the Return to Milltown at Crossroads on Park ST in Palmer MA!
If i remember to bring my camera I will do a Milltown post when I get back in town!
Posted by Shane Tenczar at 12:00 PM 1 comment:

IT'S SUNDAY! You know what that means in Suburban Wonderland?
MADMEN!
BUt we don't just watch MadMen, we watch MadMen and eat Jell-o! 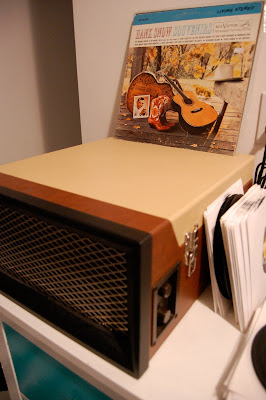 The soundtrack to my Jell-O making is Hank Snow "Souvenirs" it's very good I recommend Mr.Snow to anyone who likes good vintage country. He also has a pretty darn good Hawaiian album called "Snow In Hawaii" 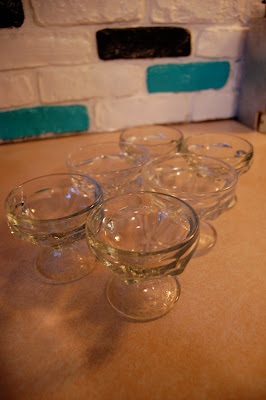 While Beck is away I play homemaker. I made the Jell-O when she was on her way home from her parent's house in Western Mass. I must say I'm happy she has the quintessential Jell-O glasses for me to make Jell-O in! 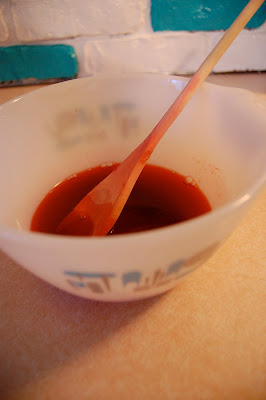 Beck and I actually use our vintage dishes on a daily basis. As I have mentioned before we both collect Blue Heaven. I like to use the mixing bowls to make Jell-O in because they have the spout-y handles! 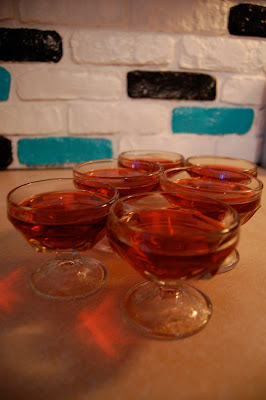 I made the Blackberry Fusion for tonight's family time of MadMen watching. I've never had this flavor before but it smelled very good! I'll tell you what I end up thinking of it.
I'm starting to settle into the area a little bit more. I don;t like driving around here because the people are assholes and a lot of things are on highway like road(and since I am a new driver I'm not the best with driving on them) But I did drive myself to the Sonic in Peabody last night.
It was worth the stress-riddened drive there.
Posted by Shane Tenczar at 8:27 PM 5 comments: